About The Khumbu Map 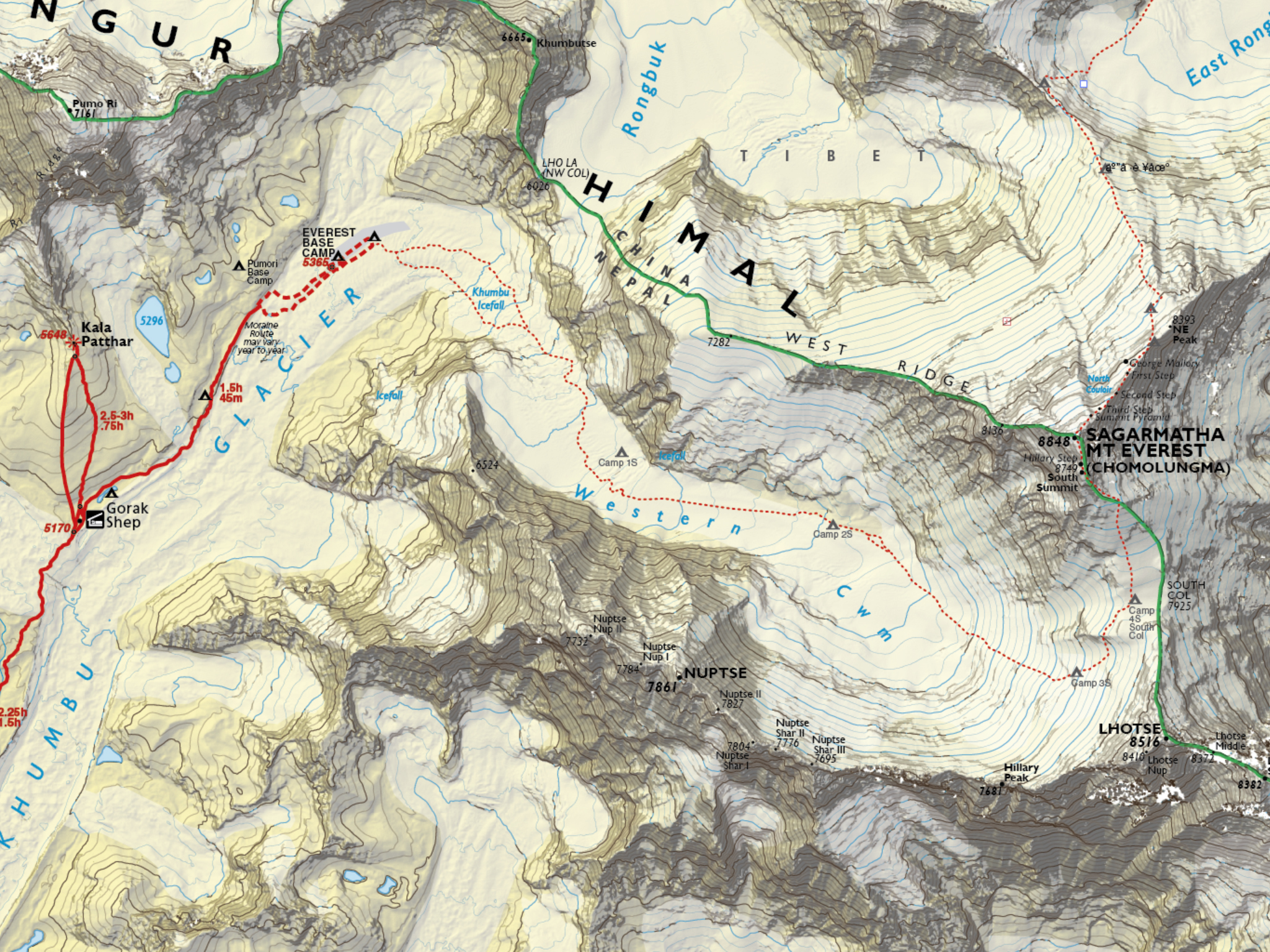 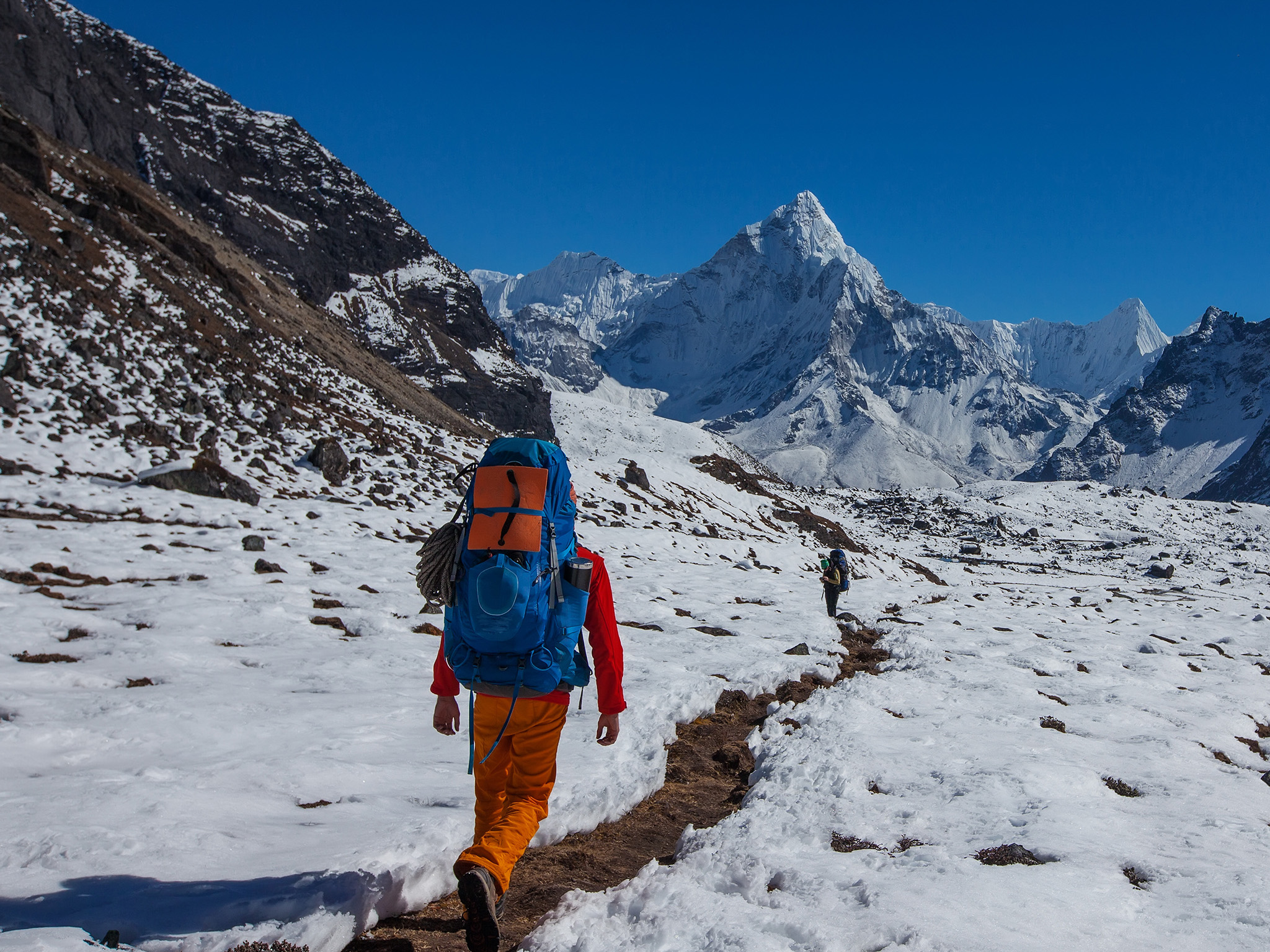 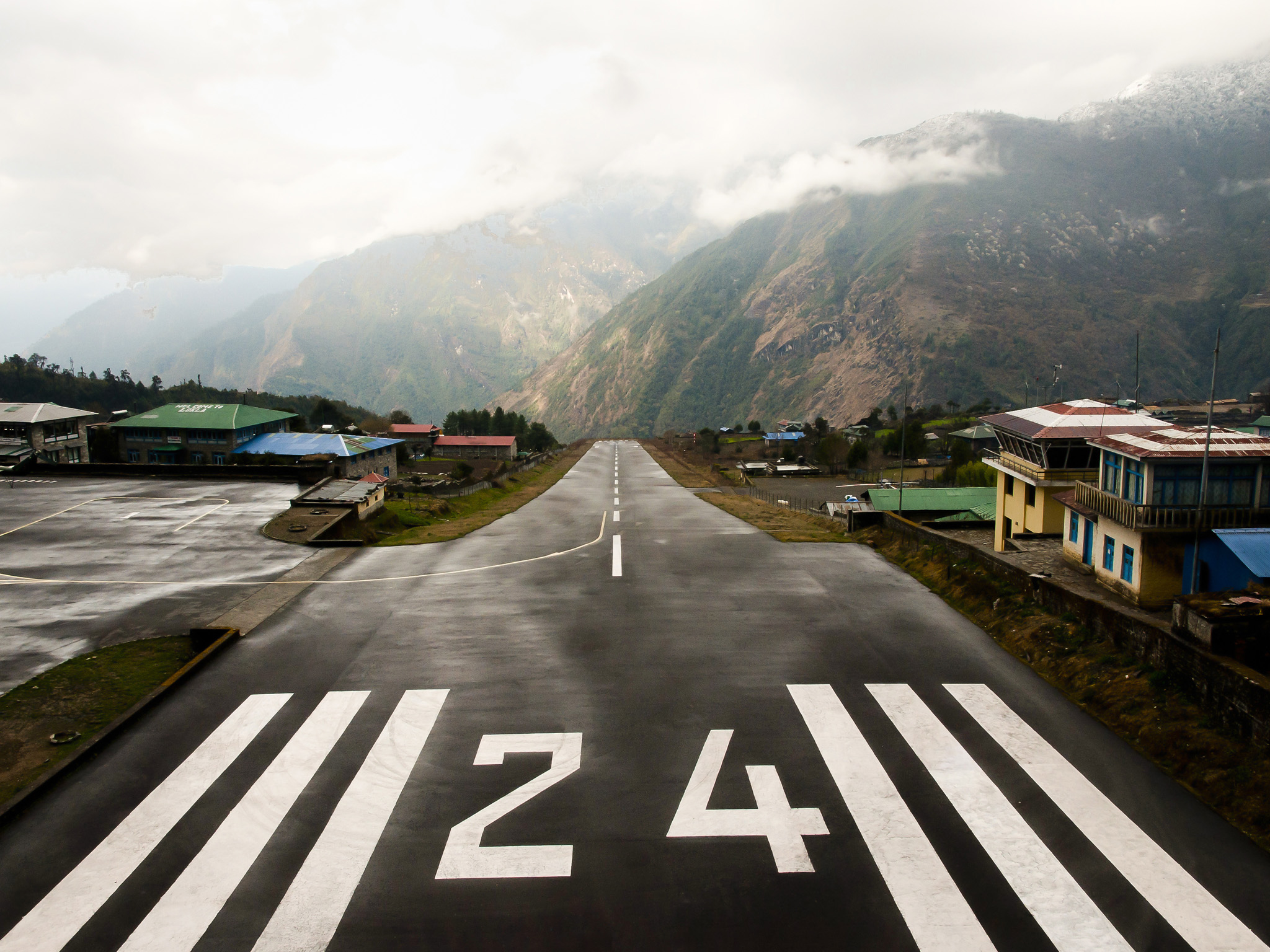 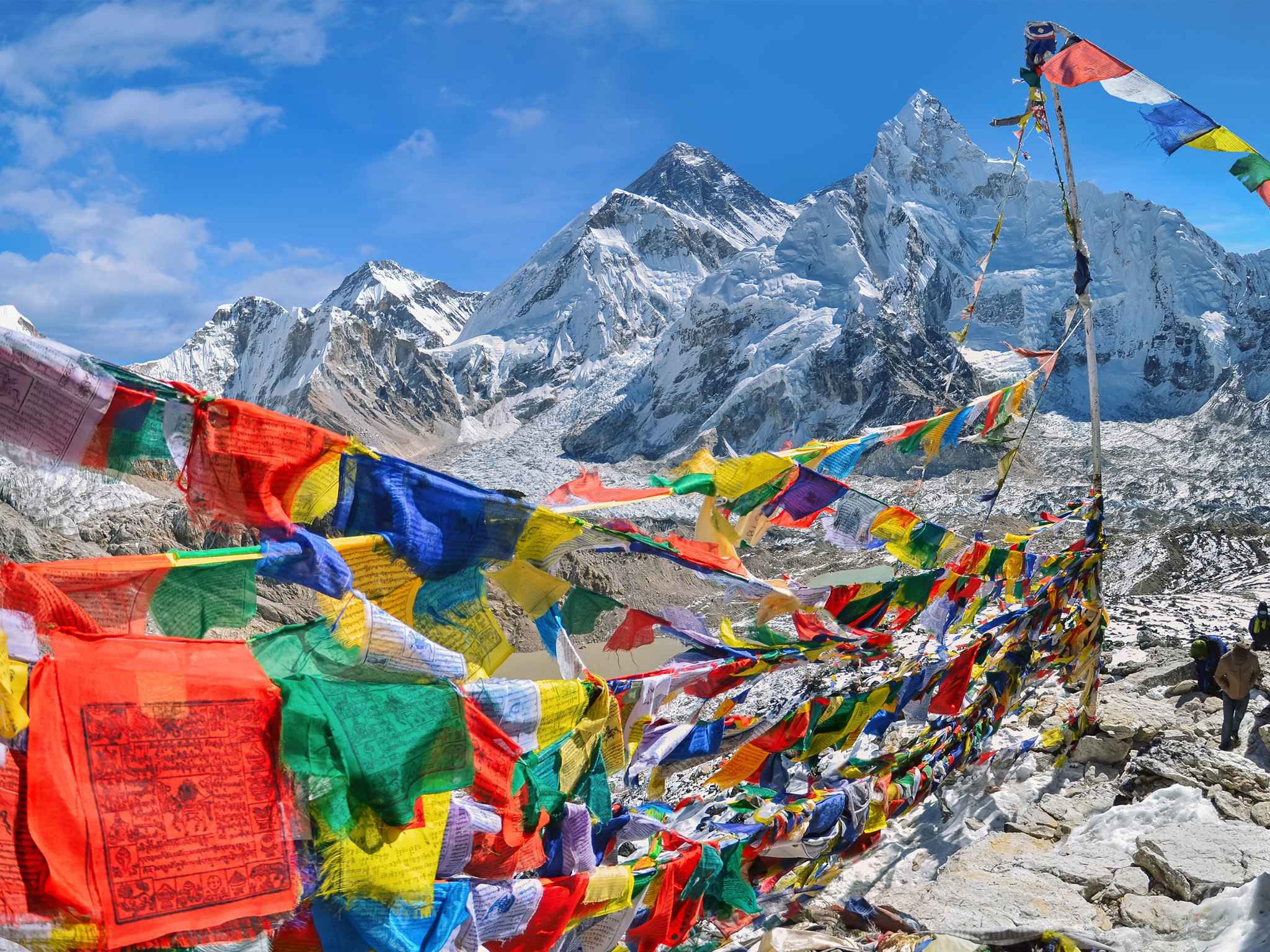 The most detailed Trekking Map for the Everest Solu-Khumbu Region 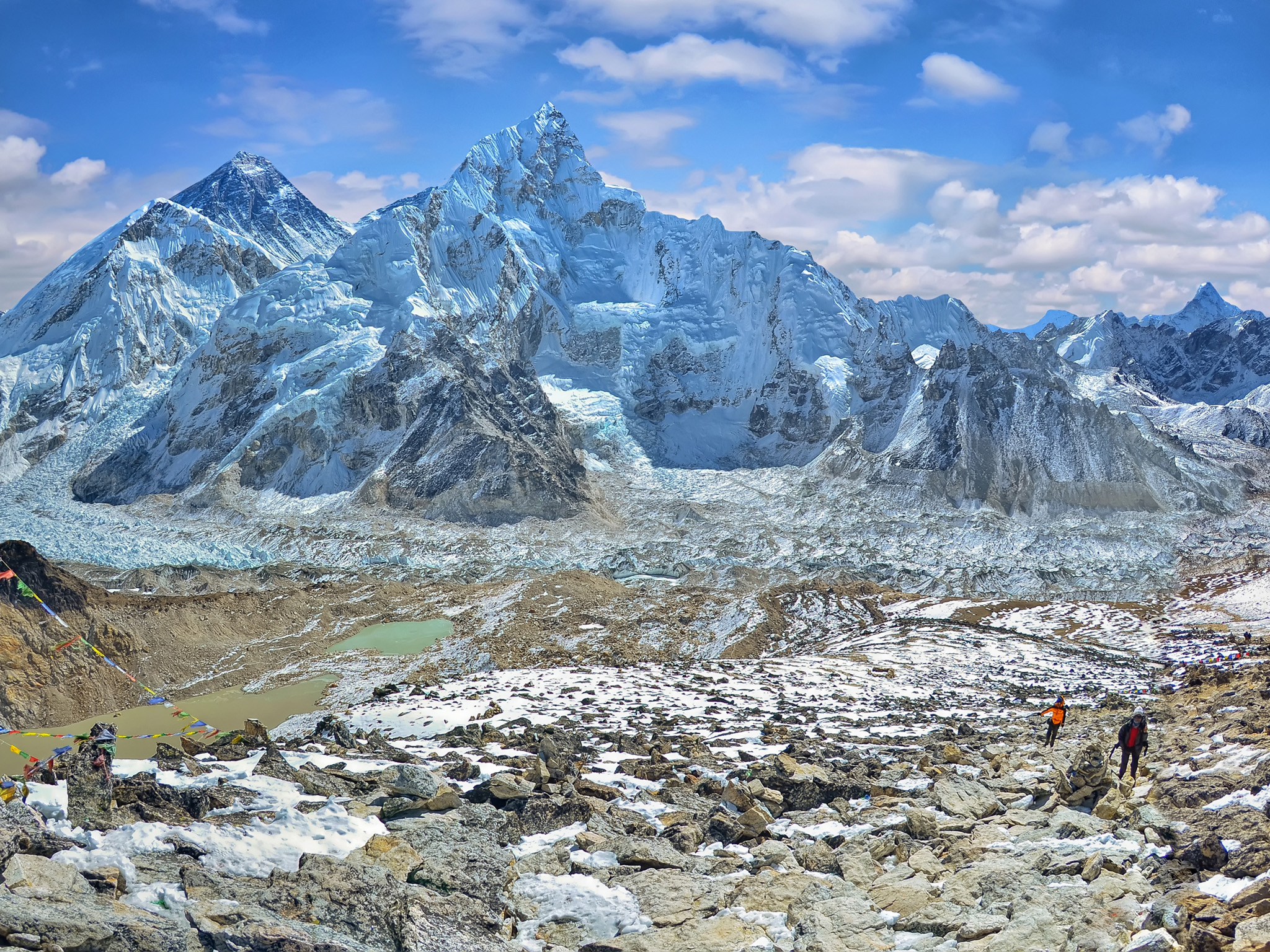 Welocme to Everest Base Camp

Trusted Trail and Climbing Information for the Nepals Solo-Khumbu Region 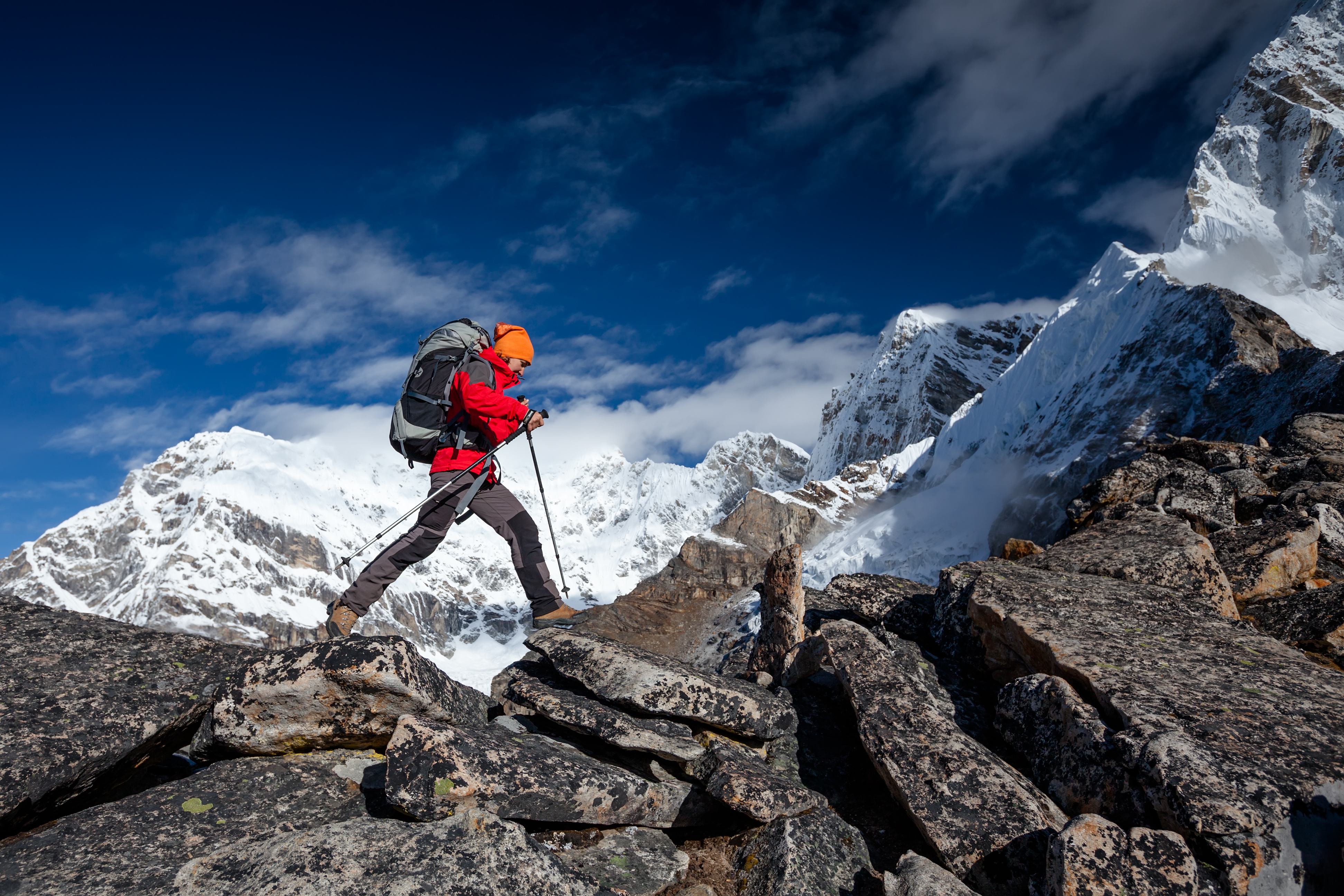 Trusted Trail and Climbing Information for the Nepals Solo-Khumbu Region

Famous for its spectacular mountain peaks and the loyalty and friendliness of the Sherpas, the Khumbu-Everest region is one of the most popular destinations for tourists in Nepal.

While trekking is possible in this area the whole year round, the best times to visit are from the beginning of March to mid May and from the beginning of September to end of November. The winters are very cold and snow may make it difficult to travel higher than Tengboche, and also lodges may be closed above this altitude. Summers, on the other hand, are wet, and the spectacular peaks often lost in the clouds. April and early May is a good time to see the hedgerows and trees bursting into bloom, with Rhododendrons, in particular, adding a spectacular splash of colour to the landscape. However, dust from the plains of India during the spring routinely provide less than ideal conditions for clear mountain views. The views are much better after the summer monsoons have cleared the atmosphere of dust, but the days are shorter and cooler.

TIMS (Trekking Information Management System) permits are required to venture forth for any trek, also for the Khumbu region, they are easy to obtain in Kathmandu at Nepal Tourism Board against US$20, a recent passport size photo and filling in the required form before you embark to your trek. If you are with an organised trekking party your tour operator will do this for you.

Also a National Park Entry Fee is required and can be obtained either in Kathmandu or while entering the Park.

Lodges and restaurants in Khumbu only accept Nepalese rupees. Budget can vary hugely between Rs 1,500-2,000 per person per day for food and accommodation - prices rise with the altitude, though you may spend more in Namche because there is more on offer. Add more if you consume beer, softdrinks and other amenities.

Sherpas speak their own language called Sherpa, which is related to Tibetan. Most Sherpas under the age of fifty can also speak English and Nepali. In addition, because many Sherpas have travelled overseas to work, it is not uncommon to meet Sherpas who are fluent in German, French and Japanese.

There are numerous flights flying the Kathmandu - Lukla route, though with a much reduced service during the off-season months. Sita is considered to be one of the more reliable airlines flying this route and operates two flights every morning from Kathmandu Domestic Airport at 07:00 and 08:20, with return flights at 07:40 and 09:00. Flights from Kathmandu take around 25 minutes. Be aware that during the summer rainy season there may be substantial delays, and even a wait of one week is not uncommon.

There is a bus running between Kathmandu and Jiri. Some buses are going a bit further to Shivalaya. From here to Namche Bazaar it is about a six-day walk. A less popular alternative is to walk from Tumlingtar.

Another route tried entering from Jaynagar, India, by train or bus. From Jaynagar its about 1-1½ day by bus or jeep to Phaplu via Madar, Sirha, Mirchaya Ramnagar, Katari, Okhaldunga and Salleri. Phaplu to Ringmo and 5 days trek to Namche.

Most lodges offer similar menus - porridge, hash browns, omelettes, dal bhat, spaghetti, fried rice, apple pie, etc. - although those in Namche tend to have a wider selection, which includes such things as pizza and juice.

Bakeries, which began as a Namche phenomena, now also operate in Khumjung and Tengboche, offer such luxuries as freshly baked pizza, German breads, pastries and even cappuccino - or as one lodge in Monju advertised: Sherpaccino!

Riki-Kur - the Sherpa dish of potato pancakes, which are delicious eaten straight off the griddle and covered with dzo (female yak) butter and a sauce made of mature cheese and spices called sorma. Due to the effort involved in making them, they are generally not listed on lodge menus. However, most places will oblige if you order well in advance.

Tzen - a heavy patte made from millet and flavored with spices.

Locally bottled water is available everywhere in Khumbu, though the price rises with the altitude. A bottle in Namche costs about 100rs. Beer and juice are flown from Kathmandu to Lukla and carried from there by porters; consequently the price is very high. Tea, instant coffee and a drink made from lemon concentrate are the cheapest beverages in the region, and are available in every lodge or tea shop for Rs 50 to 150 a cup. As there is no way to recycle plastic bottles in Khumbu (there are bins available on all walks for plastic and paper), you might consider bringing your own container and either purchasing boiled water or purifying spring water with iodine tablets.

Accommodation is in an abundance in Khumbu, and ranges from the luxurious Everest View Hotel near Khumjung to the very comfortable lodges in Namche down to those offering very basic facilities. Generally, the higher the altitude, the simpler the accommodation.

Khumbu is a very safe region and violent crime is almost unheard of. However, owing to the number of people flowing through the area on treks, it is advisable to always keep your valuables in sight.

Altitude sickness affects even young and healthy people and is a genuine problem in Khumbu. If you feel dizzy, suffer palpitations or a severe headache, return immediately to lower altitude. Do not take altitude sickness lightly. It can and does kill.

Yaks may be photogenic, but they are aggressive and unpredictable. Always stand on the upper slope (i.e., above the path, away from the drop-off) to let yaks pass. Every Sherpa has a tale about Westerners who have stood on the lower side of a trail to let a herd of yaks pass and been killed after being pushed off.

Don't drink the water no matter how pristine it appears. Use iodine tablets as a purifier or purchase boiled water. Exceptions: Namche and Phortse have clean water supplies that the locals drink directly from the tap. However, this may not be a good idea for outsiders lacking immunity to local bacteria, but certainly it should be OK for brushing teeth.

There are no telephone lines or mailing addresses in the Everest region.

Namche has a post office, but there are mixed reports of letters reaching their destinations. Postage stamps are also available in local shops.

International phone calls can be made in Namche, however this is very expensive compared to Kathmandu. The cheapest place is the one-phone government telephone office, on the second floor of the nondescript wooden building behind Hotel Buddha, identified with an official yellow sign in Nepalese with a faded paper sign in English stuck on to it. Expect a lengthy queue on Saturdays (market day).

Namche also has several Internet cafes. Satellite access costs between Rs 20-25 per minute, so keep a sharp eye on the clock when online.